Getting the most from your Himalayan Salt Lamp

Ever thought about getting a Himalayan Salt Lamp, maybe for it’s health benefits or as a delightful children’s nightlight?

Here is some personal advise from my past 10 years on both using and upkeeping your beautiful salt lamp!

To start with, they are primarily used an affordable way to help promote clean air by countering excessive positive ions produced from electric devices. Not to combat radiation as some believe.

Salt lamps naturally produce an ionization effect by heating the salt crystal with the bulb installed inside the lamp. As a result, the salt crystals attract water molecules from the air forming a Sodium Chloride (NaCl) and Water (H2O) solution. Sodium carries a positive ion while Chloride carries a negative ion. Hydrogen has a two part negative ion and Oxygen has a single positive ion. When added up you have two positive ions and three negative. After cancelling each other out, one lone negative ion is released.

The releasing of negative ions into the air is a form of air cleaning, impacting on dust and bacteria as well as refreshing the air.

‘HAVING SAID THIS’, most people are easily smitten with the wonderful calming glow a salt lamp produces.  As a children’s night light they are excellent, a perfect way to calm things down ready for bed time.

Personally we adore ours for that midnight nappy change where you want bubs to stay sleepy. LED lights just have a sharpness that doesn’t compare, regardless of how they are dimmed.

Salt lamps don’t need to be switched on 24/7, though if you do frequently forget about them it is best to leave the lamp on. Worry not, they don’t overheat.

When switched off the salt crystals will continue to attract water from the air. So you can either turn them on once a day to heat it up again or cling wrap your lamp for longer storage. You just need to remove the salt’s access to too much moisture from the environment. Stored inside a moderately sealed box works just as well.

Water collected by a switched off lamp won’t melt the shape in any way, though it can leave a salty residue around the base. If your lamp is placed on an expensive surface you may want place a small square of material under the base. I have found this does provide enough protection whilst soaking up any spills, and you can throw it in the wash if it becomes a little too salty. About once a year for us.

It is best to have a few spare bulbs handy.

Salt lamp bulbs only last approx 3-5 months because of the low heat they emit. At home we have ours on a simple timer to set-and-forget – turns on at 7am and off again at 10pm. It does appear to extend the life span of our bulbs by at least another 2 months or so.

Replacement bulbs are not expensive and easily found. Best to check your model first, though the vast majority of salt lamps take a standard 15w Oven Lamp bulb. These can be found at lighting shops, hardware stores (ie. Bunnings) or even in your grocery aisle.

Bigger is not always better.

A common mistake is thinking the bigger the lamp the better it will be for cleaning the air. While this can be true, it really comes down to how warm you can keep the salt crystals.

Since the salt needs to be warm to evaporate and produce negative ions, you will require a much higher wattage salt lamp bulb (25w+) to heat a bigger lamp through. Hence a smaller lamp with a lower energy consumption, can and does heat a larger surface area. Which in turn achieves a better effect than a larger cooler lamp. 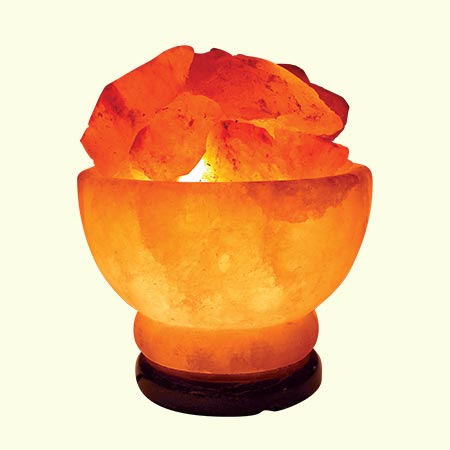 You’ll find a gorgious great range of natural and shaped Himalayan Salt Lamps in our Caloundra store. Or visit our Salt Lamp Products page for a price list and more information about Caring for your Salt Lamp.